BaryonGenesis, the master-key of all mysteries

In the article “Fundamental Physics 2013: What is the Big Picture? (by Philip Gibbs, on November 26, 2013, http://blog.vixra.org/2013/11/26/fundamental-physics-2013-what-is-the-big-picture/ )”, it wrote, “The discovery of the Higgs boson marks a watershed moment for fundamental physics. The standard model is complete but many mysteries remain. Most notably the following questions are unanswered and appear to require new physics beyond the standard model:

What is dark matter?
What was the mechanism of cosmic inflation?
What mechanism led to the early production of galaxies and structure?
Why does the strong interaction not break CP?
What is the mechanism that led to matter dominating over anti-matter?
What is the correct theory of neutrino mass?
How can we explain fine-tuning of e.g. the Higgs mass and cosmological constant?
How are the four forces and matter unified?
How can gravity be quantized?
How is information loss avoided for black holes?
What is the small-scale structure of spacetime?
What is the large-scale structure of spacetime?
How should we explain the existence of the universe?”

This list shows the predicament of the current status of physics. But, if we can resolve some key issues, all other issues will fall into its right spot automatically. One such a key issue is the baryongenesis.

In fact, by resolving the baryongenesis, all other issues will be resolved automatically. In the article, “More Cosmic Accounting And Some Speculations On Matter-Antimatter Asymmetry (by Andrew, on November 27, 2013, http://dispatchesfromturtleisland.blogspot.com/2013/11/more-cosmic-accounting-and-some.html )”, it wrote, "The trouble is that if you start with B=0 and L=0, as you would expect to in a Big Bang comprised initially of pure energy, it is hard to determine how you end up with the observed values of B and L in the universe which are so far from zero. …
we should pay more attention to possibilities in which baryon asymmetry exists in the initial conditions of the universe at the time of the Big Bang. Baryon asymmetry at that moment supports, for example, scenarios in which there is a cyclical Big Bounce with SM sphaelron process taking place each cycle ...".

At here, Andrew points out two very important points.
a.      The period of zero (0) to non-zero transformation (the creation)
b.      The possible solution as the cycling universes.

Andrew indeed has a good intuition. But, it is easier to show the answers with a reverse order, beginning from the issue of baryongenesis, then back to the creation. In G-strings (http://tienzengong.wordpress.com/2013/08/24/g-string-and-dark-energy/ ), the ordinary matter and anti-matter are having G-string representations as below.

Obviously, these eight (8) strings are unable to produce neither proton nor neutron. That is, the nature needs another string, the anti-M-string [-(a, b, c)]. Again, it has eight (8) strings.

With this G-string representation,  one Line-string (a, b, c), it can produce “8” distinguishable strings, {3 up-quark-like, 3 “anti”-down-quark-like, one positron-like, one positron-neutrino-like}. That is, the up quark and down quark must come from two different Line-strings (one matter-string and the other anti-matter-string).  Thus, if we want to produce a proton-like string (a ring-string), we need “8” more “anti”-strings which produce the *down quark". Now, we have two very important consequences.

As the anti-matter is a co-existing partner of matter, the dark mass calculation must account the anti-matter together with the matter in the equation, and that calculation fits the Planck data perfectly (see the “Pimple Model” at http://tienzengong.wordpress.com/2013/09/25/dark-energy-mystery-no-more/ ). Furthermore, the cryptic relationships between the experimentally measured Standard Model constants can also be understood (see “Litmus test for the final physics” at http://prebabel.blogspot.com/2013/04/litmus-test-for-final-physics.html ).

For the issue of “Why Does Dark Energy Make the Universe Accelerate?” (see http://prebabel.blogspot.com/2013/11/why-does-dark-energy-make-universe.html ). 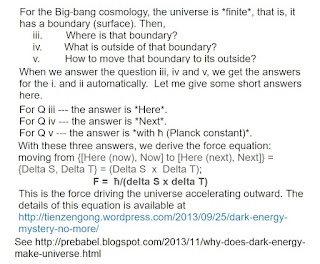 For the issue of inflation, it can be explained with the “Cycling Universes (http://www.prequark.org/Initial.htm )”, as the universe expands exponentially during each cycle (which lasts only one over gazillions a second). 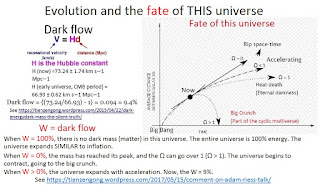 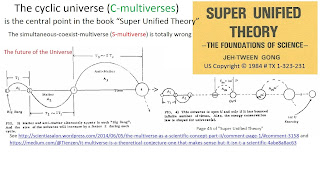 For the issue of zero (0) to non-zero transformation, see “Law of Creation (http://www.prequark.org/Create.htm )”.

Note: The most comment critic on my articles is that it lacks testable phenomenological consequences. I will rebut it with two points.

One: The G-string is an axiom system.  And in its axiomatic base, it contains *NO* known physics, neither theoretical physics (such as, quantum principle or General Relativity) nor any experimental data (such as Standard Model particle zoo, or its free parameters).

Two: Yet, this G-string representation has *predicted* or *produced* (as the direct consequences) the followings.
a.      The Standard Model particle zoo
b.      The Planck data for dark mass and dark energy
c.       The cryptic relationships between the experimentally measured Standard Model constants
d.      The Baryongenesis
e.      The rest mass rising mechanism (see http://www.prequark.org/Gravity.htm )
f.        Many others

Here are some G-theory answers for the above issues. 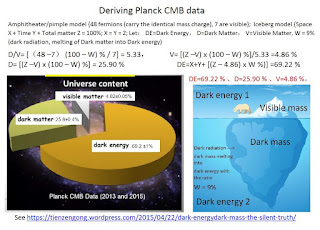 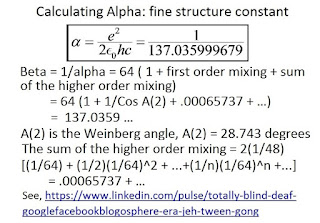 What kind of phenomenological consequences should be demanded in addition to the above? Nature sits here silently, blocking all detour attempts. No one can go over, go under and go around it. There is no other pathway to enter into the courtyard of Nature. Yet, we get one *KEY*, we unlock all locks. This baryongenesis key is such a master-key. 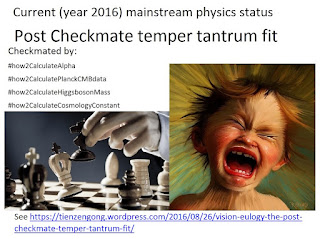 Multiverse bubbles are now all burst by the math of Nature

Steven Weinberg commented on the issue of the multiverse (at http://www.nybooks.com/articles/archives/2013/nov/07/physics-what-we-do-and-...